London has many tourists attractions but none more magnificent as ZSL London Zoo, which plays host to many exotic animals from around the world. What I love about ZSL London Zoo, is that rather than it being just an average zoo that doesn’t give back, it ensures that many of these animals do not go extinct by creating breeding programs, conservation projects, conducting vital research and educating the world on how we can prevent wiping these animals from the face of the earth.

I was invited to visit ZSL London Zoo as it had been a year since the last time I had visited London Zoo and wrote about the Land of the Lions Experience on my other blog (link will be below), so I thought this would be the perfect opportunity to introduce ZSL London Zoo as part of my London Vlog and Blog Series.

My first stop was to go to the Gorilla Kingdom which houses 6 beautiful Western Lowland Gorillas consisting of three females Zaire, Mjukuu and Effie as well as three males 4-year-old Alika and 3-year-old Gernot who were both born in London Zoo and of course the magnificent Silverback Gorilla Kumbuka. Other inhabitants of the Gorilla Kingdom also from Africa were the Eastern Black and White Colobus, the Mangabey (white-naped) and the Macaque (Sulawesi-crested). It is a little smelly when walking through the enclosure and it is difficult to take a photo of the Gorillas on the inside of the enclosure as the window is painted over, but I think that this is to discourage flash photography which will irritate the gorilla’s, the best place to get a great photo of the gorillas is on the outside part of the enclosure, where the lighting is a lot better and no flash is needed, but it is a game of luck if you can catch them outside.

The next stop was to the Tiger Territory exhibit which allows visitors to see the Sumatran Tigers normally found in Indonesia. Whilst two of its residents Jae Jae a male Tiger from San Francisco and Maleti a female came from Perth Zoo are both parts of a breeding programme to help the critically endangered species, their cubs Achilles (male) and Karis (female) are homegrown and were born in London Zoo back in June 2016. The highlight of this enclosure was the training show, where the keepers place various treats around the enclosure which encourages the Tigers to run around and exercise. Because of the way the enclosure is built visitors are able to get the perfect view of these beauties running around.

Even as a child for me Penguins have always been a big part of London Zoo from its original enclosure in the photo below, to its new trendier location at The Penguin Beach exhibit, it doesn’t matter how old you are penguins are just fascinating to watch from swimming to walking and of course feeding time. I don’t think there is a single British person that was around in the 80’s to the early naughties that does not secretly crack the famous quote “When you’re p-p-p… peckish pick up a penguin”.

Land of the Lions

Land of the Lions was launched in 2016 and was officially opened by Queen Elizabeth II and I was lucky enough to have been invited to experience Land of the Lions in its opening month. This exhibit brings India to London with a themed Indian village that covers 2,500sqm whilst part of the enclosure is designed to give visitors a multi-angle view of the Asiatic Lions, consisting of three Lionesses all born in London Zoo Heidi, Rubi and Indi who are also joined by male lion Bhanu. Other areas of interest in the exhibit are the Hanuman Langurs and the Ruppell’s Griffon Vultures as well as plenty of selfie opportunities in the design village as you will see from the photo’s below.

Other Reasons to Visit London Zoo

At the main entrance of the zoo if you head towards the tunnel this will take you to the other side of the zoo and here you will be able to step into the Africa exhibit and come face to face with Giraffes, Zebras, as well as being able to step into London’s only living Rainforest, you can walk through the Lemur walkthrough and pay a visit to those loveable characters the meerkats.

London Zoo doesn’t just exhibit the cute and cuddly it also houses different species of Bugs, spiders, reptiles and marine life as seen in my video above. 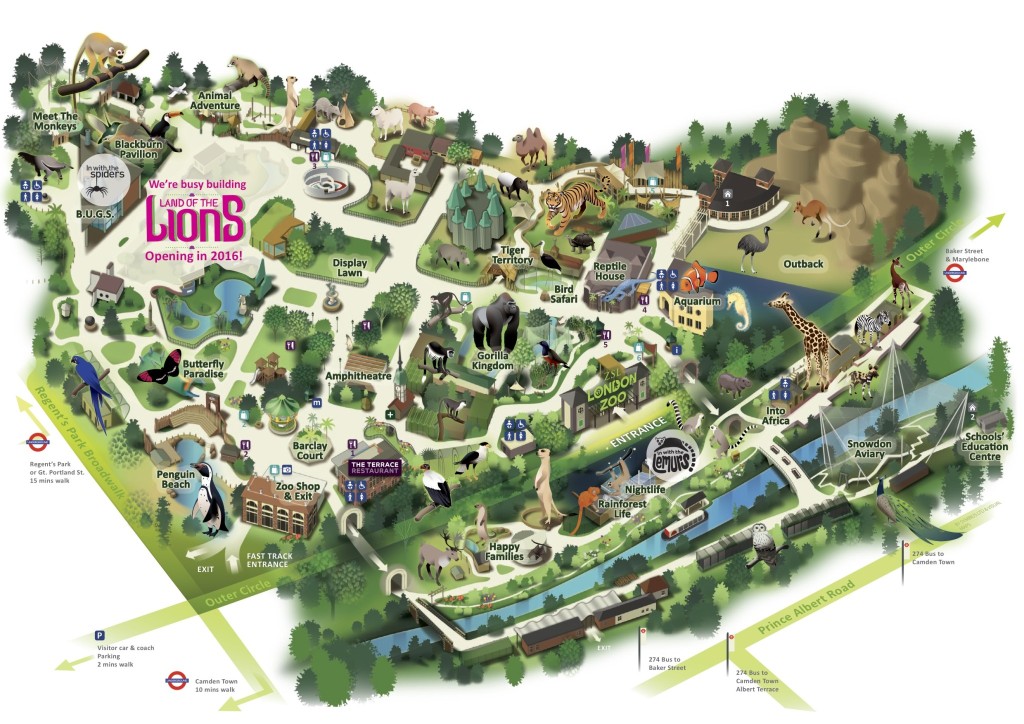 How to Get to ZSL London Zoo

16 Things To Do In Alcudia, Mallorca

Exploring the Colosseum in Rome a Place of Legends

Up at the O2 Experience London Review

Well it's been an eventful weekend a spider bite that swelled my arm, 6 hours in A&e and I didn't get super spider… twitter.com/i/web/status/1…
1 month ago
Follow me →